Knee pads are one of the most critical pieces of equipment when playing roller derby. All the veteran Derby players will tell you not to skimp on them. I have huge knee pads and, not only that, I have gaskets that I wear underneath to fill in any empty space.  It's like falling on a cloud. As an aside, I can tell you that I always wear my knee pads since I broke my patella during an open skate. I was feeling confident and happy and I ended up tripping over a kid who fell right in front of me. So, yeah, I'm pretty passionate about wearing them now.

In Derby, we spend a lot of time practicing falling, especially with the new girls. And it's drilled into you pretty quickly that once you fall you need to get back up immediately. 3 seconds is the general rule. Faster is better. Of course, not falling at all is best.

If you stay down too long, you become an impediment to other players and you are not helping your team.

I think maybe we all could use some spiritual or metaphorical or emotional knee pads, and the training to rise up quickly after life (or "Mayhem Steamroller") puts you down on the ground. 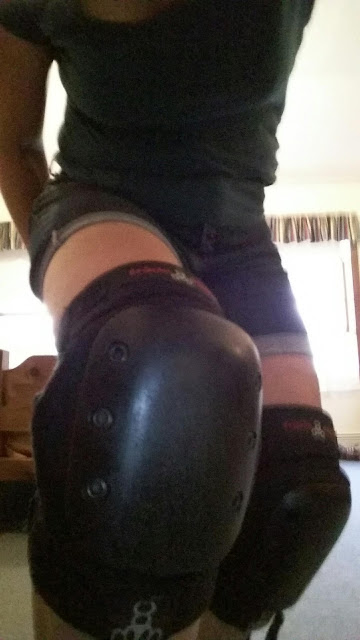 Posted by Nitro Krycerin at 7:48 PM No comments:

No worries. All ok.

Here we are again. To get cleared for sports. Again. Broken toe is healed but toenail is in process of falling off. When Yo discovered that lovely piece of anatomy coming off, I thought she had found a bug because she screamed, jumped up, and backed away from where she had been cutting her toenails. I'm afraid I laughed and she cried. Then we googled losing your toenail so it didn't seem so scary after that. She'll just have to tape it while she plays sports but I think it will come off at some point. Gross.  UPDATE: toenail came off and was possibly grosser than imagined. 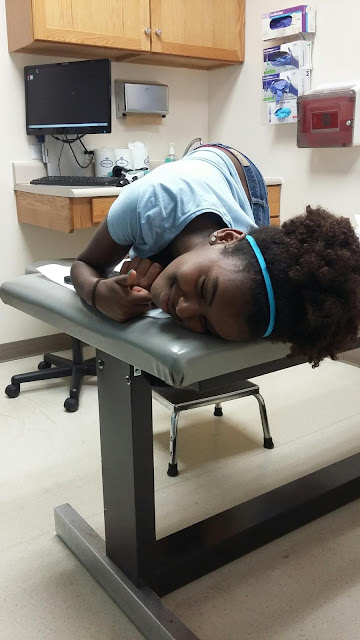 Posted by Nitro Krycerin at 5:06 PM No comments: 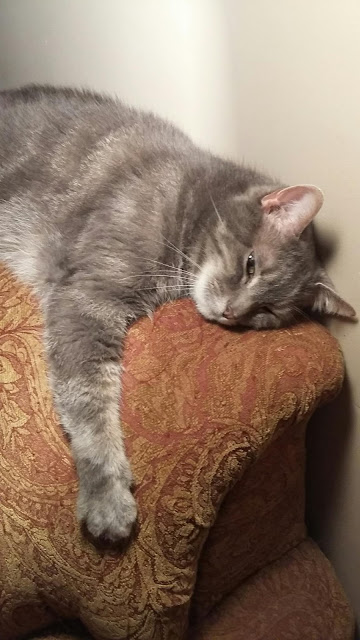 Posted by Nitro Krycerin at 11:01 PM No comments:

My children are mortified when I TRY to take selfies. "Mom! Please no!"

I think they will like this pic of my empty plate.

Last year I got Yo's hand me down iPhone and so I learned how to ... what's the verb here? Maybe just use a phone that did more than make calls. Remember those?

Anyway, I just got a new phone with a screen big enough to attempt blogging. 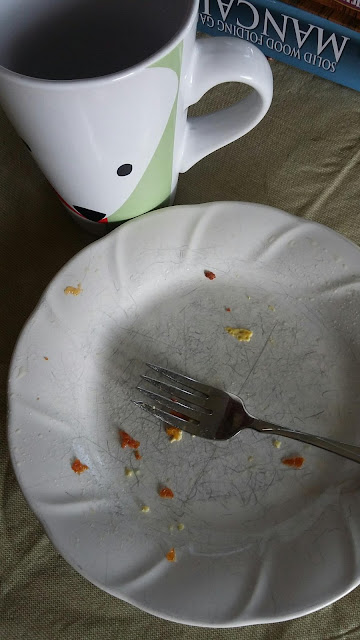 Posted by Nitro Krycerin at 8:13 AM No comments:


So, been awhile. Nuff said.

Habtamu had an osteochondroma removed from his right leg last September. It is all healed and he has not had any problems from it since. We had known about it for a couple of years. It is the source of one of my finest parenting moments. Not. He'd been complaining about his knee hurting and swelling up. I'd been telling him to toughen up, in so many words. Finally I took him into the Dr who took one look/feel and said "Oh yeah. It's osteochondroma.... that probably hurts." D'oh.

We had a lovely Christmas in Florida with the Gardners.

Day after we got back, Yordanos broke her collar bone at soccer. Some things I didn't know about broken collar bones: if the person is young enough, the broken parts of the bones will send out bony tendrils and reconnect and grow together and remodel over time. Yordanos was right on the edge of this age and it didn't look like it was growing back. At her recent checkup, however, there was definitely bone connecting the two pieces! In adults, the broken bits will be held together by scar tissue, basically, and will not have the new bone growth.

Then in March, Habtamu had an emergency appendectomy. Is there any other kind? It didn't burst, but it laid him low for awhile.

The morning before he had appendix out:

Just got the bill for the appendectomy... the hospital charged insurance $50,000. Are you kidding me? We could go round in circles about how wrong this is, and all that is broken in healthcare... But literally, people are one appendectomy away from financial ruin. We were still paying for the osteochondroma, so I called to set up a payment plan for the appendectomy. They were kind enough to tack it on to the end of the first bill. So I said, "Ok, so basically I will just keep paying indefinitely..."

Now I've got to get an MRI on my knee. It's been a-hurting for awhile, and I finally went in to the kids' Ortho. See above issues to understand why we have our own Ortho Dr. now.

Posted by Nitro Krycerin at 8:48 PM No comments:

Things here are pretty status quo.  Soccer games, sleep overs, roller skating, etc...  Yordanos had a dance on Friday.  Saturday we were eating and I asked her how it went.  Before she could answer, Habtamu chimed in, "Did you kiss any cute boys?"  She sputtered in frustration and Chris answered, "She kissed as many cute boys as you have cute girls at your dances."  Yordanos smiled.  Habtamu quickly did the math, "So, zero?"  I thought I wasn't getting enough attention so I added, "Unless her good looking father counts."
My daughter looked straight at me with those big brown eyes, her smile fading, and said, "No Dad. You don't."

Ah, nothing like a sixth grade girl to make you so very very glad you're no longer in sixth grade.

When my father ended up as the butt of one too many jokes I've heard him say, "I don't have to take this kind of abuse from you.  I can go home and get it."

So Chris and I went to a Roller Derby Bout tonight and we decided that everyone would be better off if we left the kids with their favorite babysitter, NetFlix, instead of dragging them along.
I got home first, walked through the door, and proclaimed, "Ok, people it's bedtime!"
I was distracting enough that both kids broke away from the TV, looked around, and asked, "Where's mom?"
"She'll be home shortly."  I said.
"Why didn't she come with you?" Yordanos asked.
"Because she's popular and has friends she wanted to talk to," I responded.
"No seriously, Dad. Why didn't she come with you?" without giving my initial response an ounce of credibility. 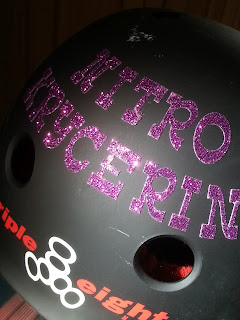 I probably should have defended my wife's honor as that was the actual answer, but it was easier to say, "We took separate cars.  Quit stalling.  Go to bed."
Posted by 133Gardner at 10:18 PM 2 comments:

Yordanos is officially at the "cycle through every station preset button on the car radio as quickly as possible then do it at least one more time trying to find the best song" stage of life.  I try to be patient, especially since I revert back to it every once and awhile myself.  Habtamu though has no tolerance for it and will tisk, sigh, and whine louder with each passing station.  He apparently doesn't remember way back when he went through it.
Part of what's frustrating is I think she can actually recognize the songs faster than I can.  My ego can handle not knowing the new stuff, but when she flicks past the light rock station and I say "Wait, Go back!" and her response is, "I don't want to listen to Jessie's Girl," well then, let's just say the Name That Tune gloves come off pretty quickly.

So the other day I'm in the car driving Yo to a soccer game and she pauses on an 80's station.
"Dad, is this song by Roses and Guns?"
"The band you're thinking of is Guns and Roses..."
"Oh, right. that's what I meant."
"... which is WRONG because the song is by HALL AND OATS"

And as much as I was enjoying my shallow victory, I couldn't decide which would be funnier: H&O covering GnR or the other way around.

Someone's Been Working Out. 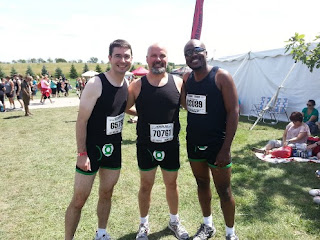 Lee and friends from this summer's Warrior Dash.  Like the uniforms?  Yes, that's Green Lantern underwear... proof to my friend's 4th grader who claimed he was too old to wear comic underwear anymore.  Au contraire mon ami!  You are never too old. (Apparently.)

Doesn't seem right that we are parents of a Middle-Schooler and a High-Schooler.  Weren't they little kids once?  Didn't I used to actually carry little Yo around the block?  Didn't Habtamu have a high voice?  And why is he taller than me? (sigh)

Habtamu is doing very well in school.  He has several ELL (English Language Learning) classes with the same teacher, in a small class room.  This has really helped him get the attention and focus he needs.  He got mostly A's and B's and one C this last semester.  For being here only 4 and a half years, every one agrees that he is doing a fantastic job.  We are so proud of him and how hard he works. 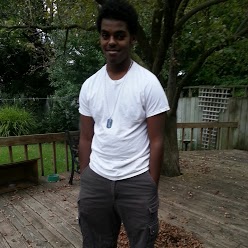 Yordanos is also doing well in school.  She recently tested out of her extra reading help, and is now in mostly regular classes.  She is still in a special math program with a smaller class size and an EXCELLENT teacher who has made math her favorite class.  We want to encourage her to do her best, but not well enough to test out of this class. :) Just kidding.... kind of. 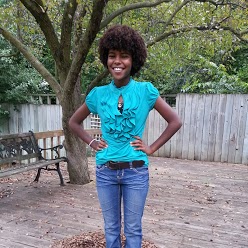 Both are playing indoor soccer this winter.  Yo played soccer all fall. Habtamu played football, which is a post unto itself.  Habtamu tried out for basketball this year, but got cut early on.  He did not seem disappointed. I asked him how he felt about getting cut.  "Ok."  Really?  Why is that?  He shrugged, "I didn't know what I was doing. Can I still play soccer?"
Posted by Nitro Krycerin at 10:40 AM No comments:

We used to blog here, too!